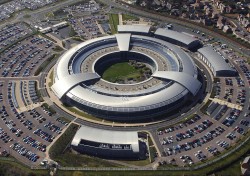 A story has broken today, about the UK spy base, GCHQ (Government Communications Headquarters), was monitoring Irish internet traffic. It’s part of the latest release from Edward Snowden on the National Security Agency. These documents cover intelligence that internet traffic sent via undersea cables were actively being monitored. These cables form the backbone of the internet.

In the documents that were released it mentions the requests from the GCHQ requests to access the cables between Ireland and Wales. These new documents were released by the Süddeutsche Zeitung. There were also requests to access the Hibernia cable which runs between Dublin and the US, run by Hibernian Networks (hibernianetworks.com). Funnily enough Hibernia Networks’s motto is “Security Through Diversity”, I guess now we really know what the diversity meant.

The Department of Communications, Energy and Natural Resources has not yet made a comment on this probably due to the fact that the story broke so late last night. Why not send them a message on twitter, or share this on FaceBook ?

We are a little skeptical that this news broke late on a Friday evening. We suspect that they wanted to get as little coverage about this fiasco as possible.

How to protect your internet traffic

It’s not 100% clear if they were able to decrpyt traffic sent over HTTPS, but pre-heartbleed, this might have been possible. Other internet traffic, sent unencrypted over HTTP can be easily sniffed and monitored with very little technology. It’s for this reason you should consider a VPN. It’s not like we would like to give you yet another reason to get a VPN, but now you do !